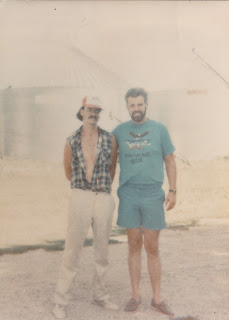 In the late 60's Leon Russel and Marc Bruno created an album called Asylum Choir II.  I still have the original album!  One of the songs is called "Sweet Brother."  No specific reason for naming this blog after the song... just couldn't think of anything else for a title.

The photo is of myself and my brother Rich.  The photo is over 30 years old and was taken outside my home in Seward, Nebraska.  In the background are two grain silos... very much a country "out in the sticks" atmosphere.

I've now lived in Nebraska for over 35 years and this photo was the only time a brother of mine took the time to see where I lived and what I did.  Rich and his family were only there for a day but it is more then the other two combined.

In 2006, I went back to the east coast to say hi to some family members.  One brother didn't have the time to see me.  We did talk on the phone and I realized that for many years he traveled with his family, from the east coast to Colorado.  At that time I lived six miles from the interstate.  Six miles.  Let me say that again - six - miles!!!

He felt obligated to tell me that over the phone and that they didn't have the time to stop in and see me.  In other words... my time was worth less then their time in Colorado... which lead to that I am worthless.

Not looking for pity, just saying that the words we use can mean so much more then intended.  What was said in that phone call lead me to avoid a wedding a few years later.  I have no idea how close my three brothers are, I just know that I'm not part of any of it.  And that's OK.

I will say Rich has always opened his door for me and let me know his family.  I haven't seen him or his family in awhile but we do talk on the phone once in awhile.  The other two?  One I have seen once in 35 years, the other one I have not seen in over 35 years.

The point?  Family don't mean shit.  Bonding takes place over a lifetime... if it wasn't there at childhood, it will never be there in adulthood.

One asked me to call after my surgery last year.  I did so, since he asked.  Then I was shamed for calling shortly after my surgery.  Yes, I was still pretty drugged up but I made a call so he wouldn't worry.

The other one wanted my address.  Why?  Who knows, he wouldn't say... nor did I ask.

The other? The total stranger? I look forward to the day I can say to him "I don't have the time."