Spirituality and the 12 Steps 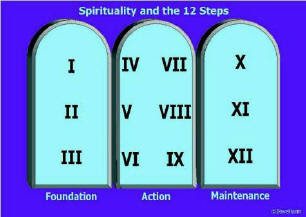 My search for a Higher Power, early in my recovery, helps me function better today.


Through my time on the web, I have met some very interesting people. Some of these folks have become dear friends. I share a lot with you - my audience. But these people have seen a more personal side of me.

I share this little bit about this side of me and this site because for every one of these find folks, I also receive more than my share of notes that are full of anger, disgust, and some just plain fanatics.

One of the most vicious of these people talks about the 12 Steps being "devil worship." While praising God, he runs Bill Wilson into the lowest depths of hell. While praising the Lord in one breath, his next is filled with wishing death to every member of AA.

I tried a couple of times to chat with this person, in what I thought, was a diplomatic way. But how does that old saying go? You can't win a pissing contest with a skunk. I finally gave up and started praying for him. That isn't meant to sound self-righteous, but rather an act of survival. You see over our short time of dialogue, this person became my higher power. And the only way for me to become spiritually centered once again was by praying for that person. The more I prayed for him, the more my Higher Power came back into my life.

It was through these conversations that I began to go back in time to my early recovery and my search for a Higher Power. I knew everything I needed to know about the religious God. And quite honestly I wanted nothing to do with a God of the church.

I grew up in a Catholic home and went to a parochial school. The god I grew up with was one to be feared. A god you never questioned. One in which you should feel "blessed" even in the face of unjust punishment.

That was the god I grew up with and it was a god I didn't want in my life of sobriety. So I searched. I studied the ancient mythologies, eastern philosophies, Islam, Judaism, Christianity, as well as Native American beliefs.

What I believe today isn't as important as the journey I took to get to where I am at right now. It was a rewarding experience, one which I honestly believe my Higher Power encouraged.

It was because of this journey that my belief in the 12 Steps got stronger and I began to compare the 12 Steps to other thoughts. The most logical was the 10 Commandments.

The picture above, I created about two months into my sobriety. Just recently I took that original drawing and created my first computer graphic of it.

I took that thought and created one for the 12 Steps. The first tablet has steps one through three and deals with our journey of finding our Higher Power. The second has steps four through nine and deals with the actions necessary to correct our past. And the final tablet has steps ten through twelve and shows what we need to do to continue a life of sobriety.
Posted by Dave Harm at 00:34