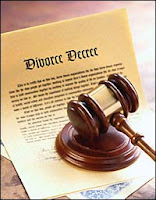 Wrote this for a publication in 2005, dealing with the recovery from divorce. It was one of the harder subjects I've written on, because even after 10 years the pain and anger of a divorce was still an open wound. Not so much, for what she did, but that I allowed it to go on for so long...

At the time, I couldn't believe it would happen to me. We raised a family, we fought, then made-up, and made plans for our future - together. We didn't always have good times, but I honestly believed we would work through all our problems. We didn't have much money, nor did we go on exotic vacations, I thought our company and our love, would carry us through any hard times.

We spent over a dozen years together and it took a courtroom about ten minutes to say it's over. We both knew our future together, would be destructive and dysfunctional, if we remained united. So we divorced. It was amazing how many people told me, it was the best thing to do or how I could do better, after it was all said and done. Whether, if it was for the best or if I could have done better, the truth was, at the time, I was scared, lonely, and full of pain. I was told, in graphic detail, the evil that my ex-wife was capable of. People thought I could just walk away from a marriage overnight and start a new life. But the pain was real. The "emptiness" - huge.

Every morning, I'd wake up alone wondering who was sleeping in my bed with my ex-wife. I'd toss and turn every night, hugging a pillow, while I visualized how someone was comforting her. She had to realize, she couldn't do any better then me. Would her new lovers, fix her insulin and give her a shot? Would they make sure, she ate a proper diet? Would they protect her from bill collectors and from her family during one of their squabbles?

As months passed, being single again, I began to feel comfortable with my new lifestyle. My solitude, began to lift the fog which had dulled my senses for far to long. When I first got divorced, I thought I lost a wife and four children, but the reality was that I lost five children. While legally, I was married, spiritually, I was raising another child... my ex-wife.

I realize that this relationship served a purpose for both of us. It kept me in control and it kept her "perfect." By being my "perfect" little wife, she never did anything wrong. I lied for her, I stole for her... most of all... I kept her on her pedestal. I was the all loving father figure, to the person I was married too.

With this knowledge, I was able to understand the pain I had wasn't from a loss of love but rather a loss of need. The void that was present, was the feeling of worthlessness. The duties, I performed as a husband, didn't teach me anything about a healthy relationship. I had been addicted to drugs, addicted to alcohol, and finally addicted to my ex-wife. This addiction, was the hardest to break. Buried in my heart, was still the fantasy, that she would realize how much she needed me. No where in my train of thought did I wonder if she wanted me.

That divorce saved my life. It was the beginning of building a foundation for a new life. My dream would be to find a soul-mate, whose love for me, would be equal to my love for her. And while she may need me, I'd know she would always want me. We all deserve that. To be loved and wanted.

As I was building this foundation, time moved along. My worries and concerns, for my ex-wife, began to disappear. One year had come and gone. I still wasn't dating, but it was no longer a concern. I had come to a point where I enjoyed my own company and I began to let God work through me. I realized that someday, in God's time, I would find my mate. But until then, I wouldn't worry about it. Nor would I rush it, or pressure it.

In time true love would come. Love built on equality, honesty, and trust. A love, I waited for... a love I wanted... a love I deserved...

Divorce was against everything I ever stood for. I gave my word, in front of God, that our marriage would last forever. Now I believe that God wanted me to live, be happy and maybe find a little peace. I could not achieve this through that marriage. Divorce wasn't easy, in the long run though, it helped me grow to be a better man and hopefully someday a better husband.
Posted by Dave Harm at 15:36