ISIS Brides? No Humility... No Home 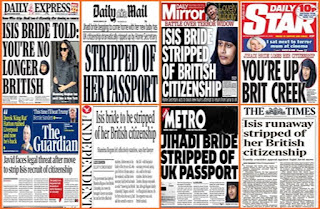 While the war with ISIS is coming to an end in Syria and Iraq, the war between the jihadis and their home countries is just beginning. There isn’t an easy answer with what to do with these people one thing stands out for me,


It’s the same thing that stands out for the alcoholic/addict early in their recovery. They want forgiveness and they do it by making amends and a strong sense of humility. They don’t justify what they have done, all they do is admit that what they did was wrong.

Recently, two different ISIS brides wanted to return home. They are both living in a refugee camp near the Turkey border in Syria. One is an American, the other is from Britain. Whether either one gets to return to their homes is not what I’m writing about. In no way should this be received as a political post. The only thing I noticed from these two ladies is the method which they are trying to use to return home.

The one from America is asking for forgiveness. She admits she made a mistake, that she was naive and arrogant. While the one from England, says she did it for religious beliefs. Beheadings didn’t bother her because it was done in the name of religion. She made the comment that the Manchester Arena bombing was justified because of the bombings in ISIS lands. Not once did she apologize for her role with any of it.

She was more concerned that the British people realized that she was pregnant with a third child. She wanted our pity because her two other children died from malnutrition. That in itself should allow her to return home.

It wasn’t enough to convince the Home Secretary that she should be allowed to come home. In fact, it had the reverse effect. He revoked her citizenship, leaving her no way to return to England. What was her response? She said she was shocked and would now look at her husband’s home in the Netherlands. She would move there and wait for him to get out of jail.

She was so sure she would be allowed to return to England and it didn’t happen. Now she sounds sure she will be welcomed in the Netherlands. Whatever does happen to her it will be of her own doings.

She freely went to Syria, with the intentions of living in the caliphate. It is time to accept responsibility for your actions and not wait for someone to give you pity.

Humility goes a long way towards healing wounds. It goes a long way to becoming a spiritual being. Humility doesn’t correct the wrongs, what it does do is move things in the right direction. If you need to use pity to get your way, then you will always be living a life of manipulation and lies.

Watching these two on the TV and reading newspaper articles about them, I do hope one gets a second chance. The other? Don’t really care what happens to her. Why? Because through it all it has been about “me-me-me.” Not once has it been about any one else but herself.

Humility doesn’t mean you think less of yourself. It just means you think of yourself less.
Posted by Dave Harm at 14:46