The End of Sgt Pepper

During April of  1970, the rock and roll band The Beatles went their separate ways.  Though the band dissolved, their music still lives today.  On my first journey to England, I went to The Beatles Museum in Liverpool.  It is a memory of mine that I will cherish for life.  The photo was taken in the museum.  It was then and still is now, my favorite Beatle Album.

The first line of this poem says, "It was 35 years ago today," which shows that this poem was written in 2005. 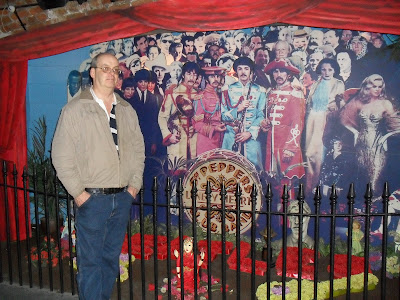 It was 35 years ago today,
The Beatles were the band that played.
They've never really been out of style,
John, Paul, George, and Ringo,
Guaranteed to raise a smile.
Don't need to introduce them to you,
The act we've known all these years,
Sgt. Pepper's Lonely Hearts Club Band.

Please, don't end the show,
John and Paul, didn't you know.
Your were the singers and you got to sing a song.
We promised, we'd all sing along...
No need to introduce all of you,
The act we've known all these years,
The Beatles and Sgt. Pepper's Lonely Hearts Club Band.