Not a 97 pound weakling

During the 2005 school year my daughter Lisa, said she wanted to join the powerlifting club. OK, she is "legally" my step-daughter, but morally, I'm her Dad. And I am quite proud of that fact. She has been a challenge, but at 15 years of age, she was slowly starting to figure out what should be important to her. But she could never find something in which she could excel in. Basketball, she had the heart but not the height. She lived in fear of being hit by a pitch in softball. So when she told me about power-lifting, I scratched my head and said "Go for it!" That first weekend, during her first competitive match, she surprised me, beyond my own expectations.

I've known Lisa since she was five years old.  For most of her life she has been my daughter.  At times, like any teenage girl, she has given me a few gray hairs.  But I don't regret for one moment being her Dad.  I helped her with her homework and have run off boyfriends, all out of love and hoping that someday she would understand that.  She has tried her best to be accepted and recognized by others, which at times has lead to some, not so healthy choices.  But slowly, she is starting to turn her life around.


When she told me that she wanted to join the local power-lifting club, I thought, why not try it.  She began going to practices and got some weights to "play" with at home.  Her coach was impressed with how fast she was picking up on the techniques and began telling her that she could break some national records.


With this bit of news, she became more excited to succeed.  I mentioned to her that while she might be able to set some records, the reality is that it was up to her.  We could tell her that she could succeed, her coach could tell her how great she is, but ultimately, the goals she sets and any records she beats would be entirely up to her.


The big day finally came and she was ready to begin competing in the world of power-lifting.  The first event would be the "squat."  The barbell is set on her neck and she goes down, holds it for a second then stands back up.  She does it with ease.  The second time, the announcer says the weight, 104.23 pounds or something close to that, and tells the audience that it would be a new American record.  Again, she goes down, holds it, and then rises.  A good lift and she has another new record.  Her third effort breaks her already "old" record.


One event down, one record broken.  On to the bench press.  Her first attempt she does with ease.  Her second attempt is 64 pounds and whatever odd amount in hundredths, and again she rises the bar from her chest and a second record falls by a mere 64/100 of a pound.  Her third attempt, she adds five pounds more to the barbell, the bar goes to her chest and she starts raising it.  About halfway up she can't move it and she fails to break her new record.


Two events down, two records broken.  On to the dead-lift.  This event, she makes look so easy.  She leans over the bar, bends her knees and picks it up and stands up.  By the second lift she breaks the former record and then by her third and final attempt, she shatters that record as well - 137.79 pounds.  Maybe not a lot of weight to some people, but we're talking about a young lady who weighs 97 pounds.  A job well done, for her first competition.  With those three records, she obtains a fourth record as well, the combined weight of all three lifts, sets another American record.

Her lifting career has ended, but the lessons she learned hopefully will stay with her for life... 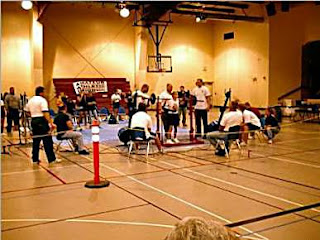