More thoughts on the 5th step 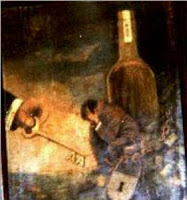 Sometimes our Higher Powers act in mysterious ways. Awhile back I did a poem and an article on the fifth step of CODA. And than about a week after I posted everyhttp://www.blogger.com/img/blank.gifthing on Creating Dreams I had a conversation with an individual about the fifth step.

He had been reading a book written in the 30s by a Lutheran minister. The name of the book was something to the effect of Living Together. The idea of the book was how people needed to live together to form a spiritual community.

One chapter of this book dealt with how to overcome the sins of our past. The author believed that we did indeed have to confess our sins to our Higher Power. It should be noted that this book was written by a Christian minister so Higher Power was our Lord, Jesus Christ. I say Higher Power because where we go from here is more about spirituality than religion.

The author believed that while we needed to seek forgiveness from our Lord, we also needed to tell another human being. He had a couple of reasons for this belief. Our minds can create illusions that are not healthy for us. By asking for forgiveness from our Higher Power and wanting to leave it there, we are in a way, becoming our own higher power. Our minds have the power to believe whatever we want it to believe. We can convince ourselves that forgiveness came from God above, yet the reality is we have received forgiveness only from ourselves.

Getting back to the title of the book Living Together, the author believe to have a spiritual community, we needed to tell someone else our sins. We needed that sense of trust from another human being and by doing this we are able to see that we are not god. That some of our wrongs can't be fixed by ourselves.

We learn through this act the humility which will help us in our spiritual journey. With the person sharing their sins with another spiritual bond is formed between the two. And in reality the two become one and begin Living Together.

Kind of sounds like the fifth step doesn't it? Bill W and Dr. Bob realized that for the alcoholic to recover they needed to share their past. There could be no secrets. And by this sharing these two become one. The alcoholic begins to learn the power of trusting others and the ability to honestly deal with their past and accept the forgiveness from his Higher Power and himself.

What was interesting about our conversation was the realization that this book wasn't written for alcoholics or the fifth step. In fact, AA still wasn't in existence. But what this Lutheran minister, Bill W, and Dr. Bob realized that for us to live together all secrets needed to disappear, while trust and honesty became a major part of our lives.

By Living Together, we live in spiritual peace and humility.
Posted by Dave Harm at 11:45