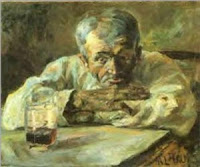 The 7th AA Promise says, "We will lose interest in selfish things and gain interest in our fellows."

"Poor me." That is basically the way I lived my life when I drank. Every game I ever played all revolved around "poor me." I shared the stories of a dysfunctional childhood to start relationships. Then I'd tell friends how I was screwed over on a drug deal. This "Poor me" attitude got me into all sorts of dramas that kept my victim hood alive.

By being a "Poor me" person I never had to accept any responsibility for my actions. Yes, I did get a DUI but it wasn't my fault. You see I had to work so many hours overtime, that when I was finally done, I went to the bar for just a couple of drinks. I wasn't drunk... I just fell asleep, that's how come I crashed my car. That story got me a few beers by friends and bartenders alike.

The "Poor me" stories were used to attach needy women to my side. I'd share stories about how misunderstood I was by my last girlfriend. How I had no freedom and how I treated her like a goddess. Which often brought me the "Oh... you can treat me like that," with eyes blinking. And by the end of the night we'd be a couple.

The "Poor me" game manipulated me into many homes and beds. And actually along the way, there were some people who were genuinely concerned for "Poor me." Those people would give me a place to sleep and a belly full of food. They'd take care of me for a couple of days until they finally realized that "Poor me" was just a game. But it didn't really matter because there were always new people just waiting for "Poor me."

I learned this life saving game as a child. A child who grew up in a violent alcoholic home. At the time, it was played to survive. But over time I realized that this game not only could help me survive but could also was a way to seek some revenge on what I believed to be a stupid audience.

I played this game and all its off-shoot games until finally no one would play with me no more. The only recourse left for me was to invent a new game with new rules. This game would start with trust. But not in myself, that would come later, but first I had to find trust in a Being greater then myself. That was the key ingredient to a new life. And with trust came the rules for this new game.

They would include honesty, pray, meditation, gratitude, and love. Things still don't work out every time with these rules, but it does make the games a lot easier to play. What I mean is that without the manipulation as a backdrop, my mind could relax because I didn't need to plan the next five moves that I made.

In fact, it got to the point that I know longer cared if I won the game or not. I no longer always had to be right or hold the upper hand. I am now just grateful to be in the game at all. I can accept failure, just as graciously as I can accept success. It's all just part of my journey.

Through the years of my own recovery, I have seen the 12 Steps at work in five different groups. And even though I find great support at Alcoholic's Anonymous meetings, nowhere do I feel more at home then at an Adult Children of Alcoholics Anonymous (ACOA.)

The first time I heard of this group, I had a really uneasy feeling. No one at that time, except my now ex-wife, knew about my childhood or about my parents. It was still a very well kept secret in my life. The first time that I said that I was an adult child, I shook and fought hard not to cry.

For the first time, that little boy in me felt validated. Years ago when I asked the police to help my family, they did nothing. I was balling hysterically telling the police that my dad was going to kill my mom and they wouldn't do anything.

A couple of weeks later I was at my grade school after another night of savage beatings. I took a nun aside and asked for help. I was taken to the school's priest and we prayed. That day I lost all faith in God and in adults. I was a child and I was thrown into the role of being a parent to myself.
Posted by Dave Harm at 12:15