The thought for this poem was inspired by Jay Knepper of Beatrice(NE). I published a poem of his about an old house, for my old 'Poets Quill' column. It made me remember all the old things I've "thrown away" because they outlived their usefulness. 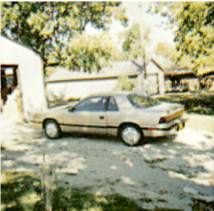 188,000 miles later
her valves gave out
anti-freeze spilled into her heads
slower and slower she limped home
in the comfort of her garage
placed on life support

in the corner of the lot…
she’s at rest
a shell of her former self
now salvage…
her parts… still cruise the streets
through the dirt, grime, rust
and broken windshield
she still has class
always waiting for her owners return
Posted by Dave Harm at 02:23