The fears will leave 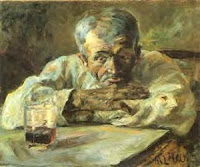 My thoughts on the 10th AA Promise, "Fear of people and of economic insecurity will leave us."

I lived in constant fear of people when I drink. I had so many secrets that I didn't want revealed. So many stories. If I avoided people, stayed away from them, then I didn't have to worry about my lies being exposed. I constantly felt like I was being hunted. That some how all my stories would come out and my house of cards would come tumbling down.

Today, I don't fear people, though I will admit it's hard at times to be around people. My whole drinking life was built around lies and manipulation. Sobriety brought me into the real world and with it I know I need to be honest. And at times being around people hurts because... I can't always give them an answer they'd like. Some will ask "Can you pay your bill on Friday? The old Dave would say sure and forget all about it. The new Dave knows if I say yes then I am committed to doing it. And it gets frustrating when I might respond "I'll try," and that's not good enough. They want a concrete answer.

If there was one "good" thing about drinking it was that I had no fear of economic insecurity. All I feared was where my next beer was coming from. I had no morals so I had no problems lying to anyone. "The check is in the mail," or "honest honey, we're just friends... I'd never cheat on you."

Today, economic insecurity still bothers me a bit. Today, instead of worrying where my next beer was coming from... my fear is how will I find the money to get my wife's pills? Or where do I pinch and save to come up with the money to replace our roof.

But the major difference with economic insecurity between drinking and now is that there isn't any paranoia. I'm no longer losing sleep wondering if my drinking will cost me a job. Today, I know I am a reliable and honest employee and that part of economic insecurity has left me.

With the help of my Higher Power, thankfully, these fears have disappeared...
Posted by Dave Harm at 13:23